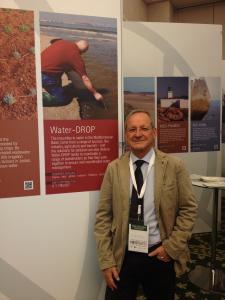 Under the Italian Presidency of the Council of the European Union, in order to mark the passage to the ENI (European Neighbourhood Instrument) CBC Med 2014-2020 Programme, Joint Managing Authority invited Water-DROP project partners to participated to the “Cross-border cooperation in the Mediterranean: achievements and new challenges in focus during 'NextMed' Conference: Cooperation in the Medtiterranenan goes on” that took place in Rome, 12th dec 2014 .

The conference aimed to showcase the achievements of Cross-Border Cooperation in the Mediterranean region and highlight coming challenges under the European Neighbourhood Instrument (ENI) and presented 95 projects funded by the ENPI CBC Med 2007-2013 Program.

Water-DROP coordinator exposed project activites as shown in the picture.